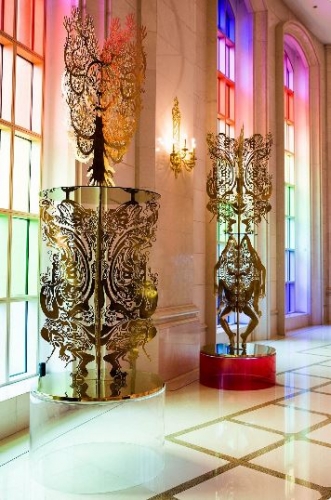 In the Mythical Forest is an extraordinary creation of Wu Jian’an & Wang Tianwen at Aurora Museum, where the ancient mythology, the historical relics, the intangible cultural heritage and the contemporary art are blended together, showing a lively energy behind the tradition. In a sense, cultural antiques are to be seen as vehicle of mythical messages; folk art, fragments of ancient mythical memories; and contemporary artist’s reinterpretation, the mythical re-invention. The three different dimensions converge at “myth” – which is also the core of the “mythical forest”.

The “Mythical Forest” is a mysterious land of the unknown where spirits, forces of nature and man dwell, a Zero Space of synchronicity where the past, the present and the future co-exist. In the gallery space, the boundary between different works is blurred; so as that between heaven and earth, past and present, myth and reality, art and non-art, leading to a state of non-self and non-others.

The Aurora Museum has long been committed to promoting and furthering the study of ancient artifacts from four perspectives – materials, techniques, forms and patterns. In the Mythical Forest features a designated area under the theme of “The Birth of Conquering the Fiery Dragon”, intending to cast light on hide treatment, puppet making and behind-the-scene practice of shadow play t give audience more insights into the Chinese national intangible cultural heritage.