Mr. Gnoh, The Person Whom I Know Well No. 4 我所认识的Gnoh 先生 4 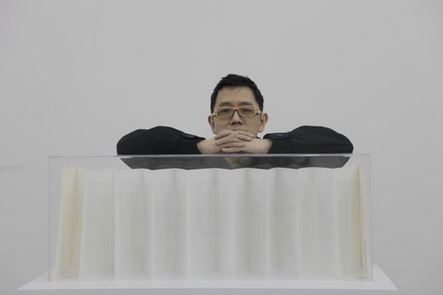 Since the early 1990s, Hong Hao has been manipulating images—of world maps, Chinese scroll paintings, commercial advertisements, and his own possessions—to satirize contemporary China and its post-Mao ascendancy to global political and economic power. Working in series, and primarily using photography, Hong disrupts the historical, commercial, and authoritarian narratives that shape perceptions of Chinese society and culture. Among his earliest works is Selected Scriptures (1992-2012), a pseudo world atlas filled with maps visibly altered by such dominant forces as multinational corporations and military might. He is best known for “My Things” (begun 2001), a series of photographic prints of his seemingly unquantifiable possessions. Collaged into mesmerizingly detailed, formally and chromatically sophisticated compositions, these images of Hong’s “things” are portraits of the artist himself and of the communist-capitalist society he so effectively critiques in all of his work.