After the Stone Age 后石器时代 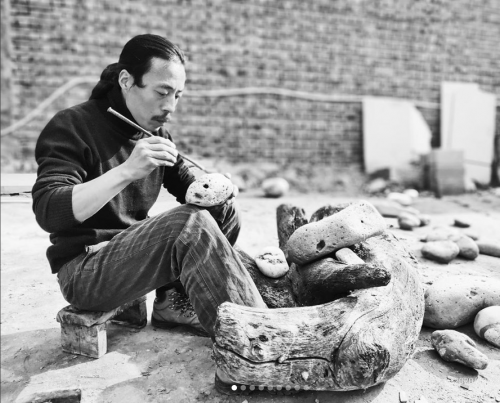 Song Hongquan grew up as the son of a noted stone carver in the most celebrated stone-carving district of China, Quyang County, famed for 2000 years for its marble, granite and jade.  The artist has never had formal instruction in carving; he says he learned just by watching his father and other carvers.  In After the Stone Age (2011), he blurs the lines between carver and carving, past and present by using the tools of a stone carver to carve, out of stone, the tools of a stone carver.  He got the granite for this work straight from the quarry, and spent three years transforming it into perfect facsimiles of 75 traditional tools—including crowbars, hammers, bores, chisels, maces and pincers—and the box in which they are kept.  That process was a prolonged meditation on the relationships between human beings, civilisation and nature, he says: “It was after the Stone Age, when man invented metal tools, that we started moving away from nature.”  While that was regrettable in some ways, it also brought blessings and wonders, including those of art itself:  carvings were among the first artworks ever made, and the birth of the Iron Age, with its metal tools, opened up vast new possibilities for creation.