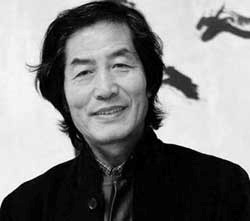 Wang Dongling is one of China’s most highly regarded ink artists. Trained in classical calligraphy, he studied at the progressive Zhejiang Academy and became increasingly involved in China’s avant-garde movement in the mid-1980s. While continuing to work in traditional styles, he also explores the abstract potential of calligraphy in freely brushed works that can be compared with Western gestural abstraction. His latest Chaos Script series is considered a breakthrough in contemporary Chinese calligraphy, and he has been asked to perform this unique style of writing in a large scale format at institutions around the globe. His work has been collected by numerous institutions including the British Museum and The Metropolitan Museum of Art, New York.