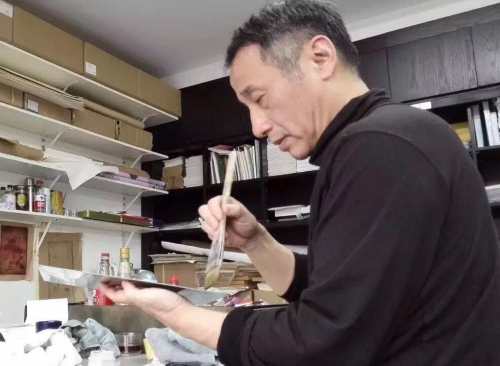 Among the first of a generation of artists who emerged from the academies when they were reopened after being closed during the Cultural Revolution, Yan Shanchun graduated from Zhejiang Academy of Fine Arts (now the China Academy of Art) in 1982, specializing in printmaking. He was trained in traditional Chinese calligraphy and influenced by American abstract painting. Although Yan is fully cognizant of the long history of abstract painting in the West, he has been less concerned with rivaling these antecedents than in modifying their example to enrich the valued tradition of Chinese literati who cultivated the arts of calligraphy, painting and poetry in seclusion. That privileged life-style is no longer possible but in his detachment from the goal-oriented atmosphere of the contemporary art world and in the development of his own quiet poetic sensibility equally attuned to poetry and the visual arts, he may be considered a twenty-first century equivalent of these legendary polymaths.