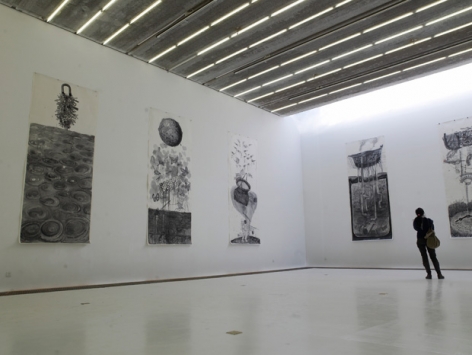 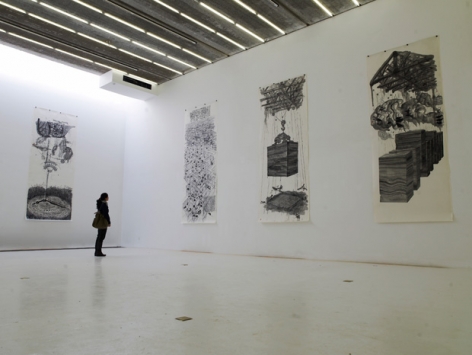 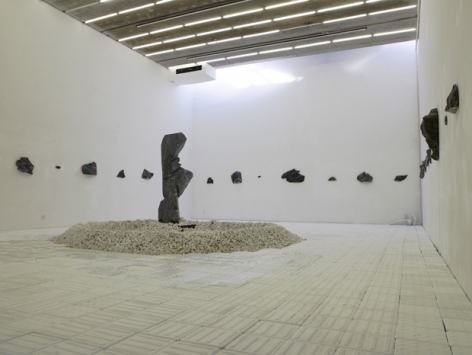 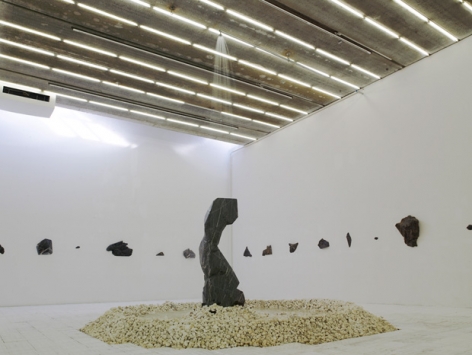 Scheduled to open at Chambers Fine Art New York on March 12, 2009, Mochou: Recent Works by Qiu Zhijie is an exhibition that nearly did not happen. During the preparations for the current exhibition at the Ullens Center for Contemporary Art in Beijing – Qiu Zhijie: Breaking through the Ice – Qiu Zhijie began working on a series of fourteen paintings in ink on paper related to a series of larger works on the same theme exhibited at Chambers Fine Art Beijing in 2008. Well known as an artist who thrives on challenges, this exhibition was more than he bargained for.

The works arrived at JFK on March 5 but on March 11 the works had not yet been released by US Customs, making it likely that the exhibition opening would indeed be a “failure,” the theme underlying the full range of works related to the Nanjing Yangtze River Bridge and the related Mochou legends. Fortunately Qiu Zhijie had arrived in New York on March 10 and responding to the desperate situation, agreed to paint directly on the gallery walls. In the morning brushes and ink were purchased in Chinatown and during frequent breaks for smoking on the steps outside the gallery building, he drew a series of very rough sketches for the three walls and one partial wall of the gallery. Beginning at 3pm on March 11, he worked continuously without sleeping for the next twenty hours, putting the finishing touches and adding inscriptions around 11am the day of the opening. Then he crashed and nearly missed the opening later in the day.

The resulting wall-paintings are an extraordinary accomplishment, among the best works of this prolific and highly inventive artist. Whether linked by formal similarities or playful analogies, the isolated objects and larger groupings in the wall-paintings frequently reference classical Chinese themes and imagery. He also incorporated a number of objects that had caught his eye during the twenty–four largely sleepless hours he had so far spent in New York (a conch-shell in the apartment where he was staying, straws that accompanied cold drinks purchased at a Vietnamese restaurant in Chinatown). Further personal references were added to the free-wheeling imagery on the wall, notably the hand of his recently born daughter opening a classic Chinese text Image of the World next to the gallery entrance.

Having worked in the full range of media available to the artist today including video, installation and performance for most of his career, Qiu Zhijie had mostly relegated his skills as a painter and calligrapher to a background role. Faced with this challenge, however, he pulled out all the stops, rediscovering skills and techniques that had been latent for many years. When it is increasingly common for successful artists to work with large numbers of assistants, Qiu Zhijie shows that there is no substitute for the intimate relationship between the hand of the artist and the materials he is using.

Strategically placed on the walls are Xeroxes of the paintings exhibited in Beijing and the fourteen works still with US Customs. The wall paintings will be on display until May 9, at which time they will be painted over.