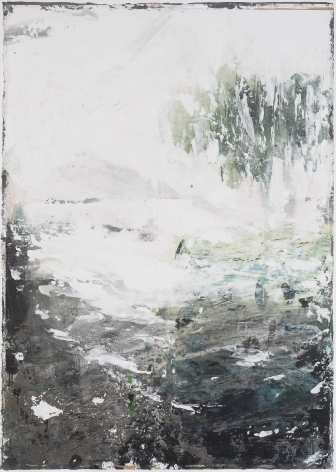 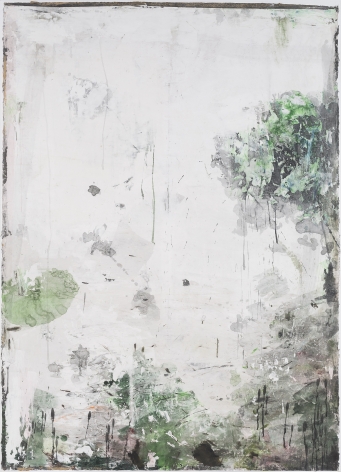 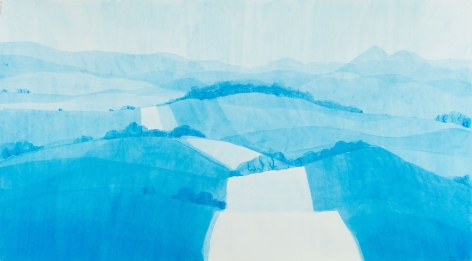 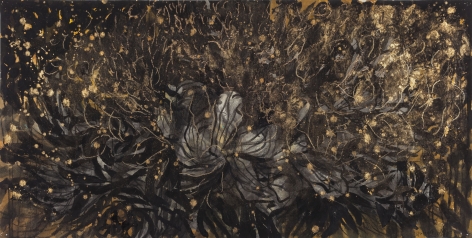 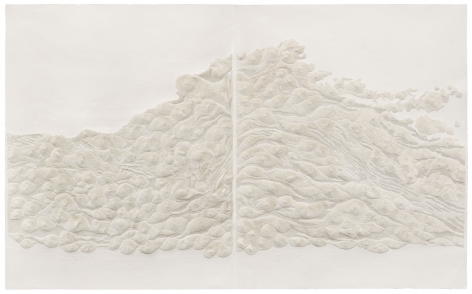 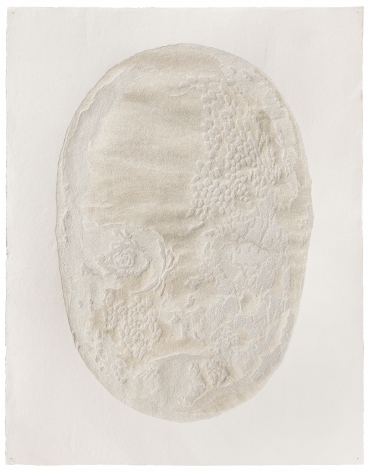 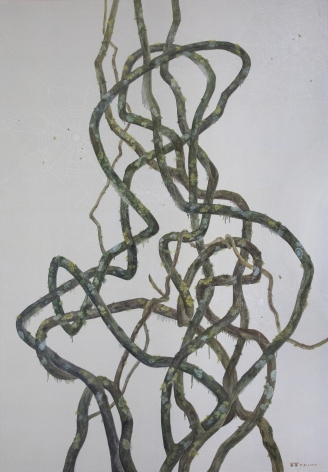 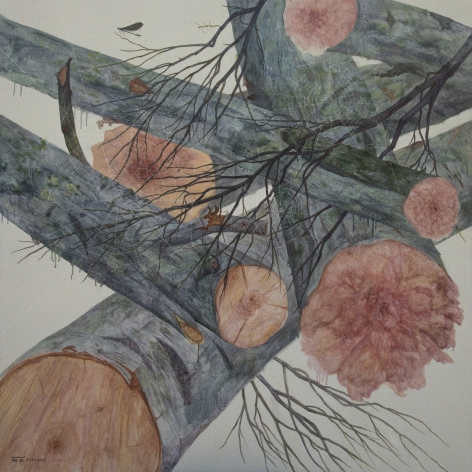 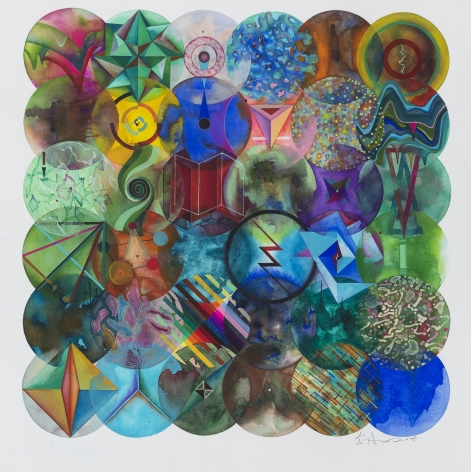 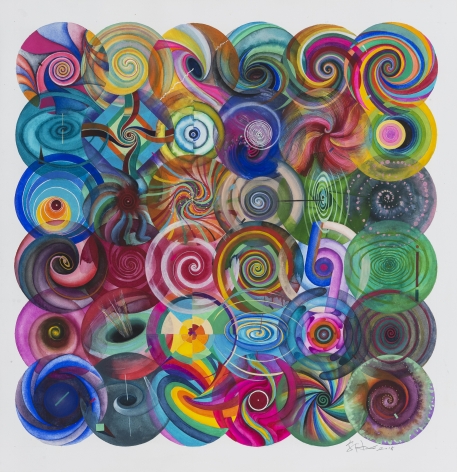 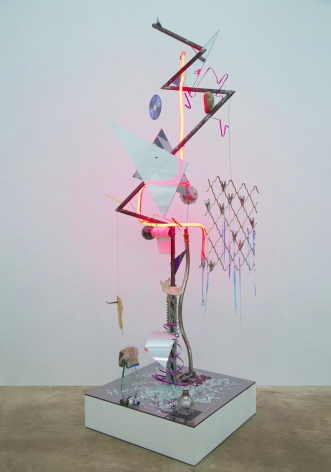 Born in Shanxi in 1976, Fu Xiaotong received her BA in Fine Arts from the Tianjin Academy of Fine Arts, Tianjin in 2000. After working at the Institute of Fine Arts, Hebei United University, she received her MA in Fine Arts from the Department of Experimental Art, China Central Academy of Fine Arts, Beijing in 2013. The needle is traditionally used for the feminine pursuit of embroidery but for Fu Xiatong it becomes the implement with which she perforates the sheets of paper she uses for her works many thousands of times. She has described the way in which thousands of pinholes made in different directions are brought together to form shapes of mountains, waves and patterns inspired by other forms of nature.

With her needles she damages the integrity of the surface of the paper but in doing so creates a new energy in which forms emerge from the angles at which light strikes the paper. Seen close up, the surface of the paper resembles that of a densely-worked tapestry in which abstract patterns are created from a limited range of shades of white. Seen from afar, these closely interlocking shapes are seen to have been inspired by changes of terrain in mountain ranges as they reach to the sky, by the shapes of swirling eddies of water, or the organic patterns of animal skins and cellular matter.

Wang Gongyi was born in Tianjin, China in 1946, received her master’s degree from the Printmaking Department at Zhejiang Academy of Fine Arts (now China Academy of Fine Arts) in 1980, and stayed on to teach after graduation. In 1986, she was invited by the French Ministry of Culture to study art and art education in France, and to participate in exhibitions. In 1992, she worked as an associate professor in the Department of Printmaking at the Zhejiang Academy of Fine Arts and moved to the United States in 2001. From 2004 onwards, Wang Gongyi entered a phase of intense artistic creation, where new experiments and themes constantly emerged. She broke free from many physical and mental restraints that stemmed from the hardship of her youth. With her feelings of anger and grief gradually melting away, she steadily returned to her natural self. In 2005, after accidentally creating a painting exclusively with the watercolor pigment Windsor Blue, Wang became inspired to create an entire series of work using only this color. Her Windsor Blue artworks are sometimes abstract, sometimes landscapes, and sometimes floral. The subtle and pure beauty of the series is meant to reach out to the viewer and take them to a peaceful and refreshing environment free of noise and restlessness.

Wu Didi is known for her poetic nature studies in which the absence of context leads to concentration on the specificities of natural forms that are generally overlooked. In this case, her focus is on hanging vines, and the cut up trunk and branches of a tree. She has written of her quest to investigate the nature of plants through actions such as breaking, twisting and bending and wishing to convey their toughness and resilience. In the works we are exhibiting, the sturdy, intertwined vines in one canvas contrast with the fragility of nature that is depicted in sawed apart pieces of wood on the other. Among the wood pieces are spider webs and insects, adding motion to her otherwise static compositions, and once again signifying the resilience of nature.

Wu Jian'an was born in Beijing in 1980. He received his MA in Fine Arts from China Central Academy of Fine Arts, Beijing in 2005. Now he lives and works in Beijing as Associate Professor of School of Experimental Art of Central Academy of Fine Art. In the hands of Wu Jian’an, the traditional Chinese medium of paper cut is elaborated and used to explore an idiosyncratic range of iconographic source material culled from all over the world. Over time, Wu Jian’an’s works have grown both in scale and complexity as he increasingly conceives individual works as part of larger installations.

Since his first exhibition at Chambers Fine Art in 2006, Wu Jian‘an has established himself as a unique figure in contemporary Chinese art. Having chosen paper-cut as his primary means of expression in his early work, he has continued to use this technique in increasingly complex multilayered compositions and installations that frequently utilize thousands of components. Simultaneously, the range of references embodied in his works has grown enormously, embracing a multitude of mythological, esoteric and contemporary references.

An ongoing theme of Wu Jian'an was inspired by the book Ten Thousand Things: Module and Mass Production in Chinese Art by Lothar Ledderose, an investigation into the use of modular and standardized production systems throughout the history of Chinese art, in bronzes, porcelain, and architecture. While not referring to the book directly, Wu found a striking similarity between his own working method and Ledderose’s perceptive commentary on many individual parts and people working toward a larger goal. Wu Jian'an's Color Balls series is an illustration of this method, in which many distinct parts, painted one by one in detailed watercolors overlap and yet work together to create a greater whole.

Born in Hangzhou, China, Yan Shanchun graduated from the Printmaking Department of the Zhejiang Academy of Fine Arts, Hangzhou in 1983. He currently lives and works in Hangzhou and Shenzhen. Early in his career he worked as an ink painter before concentrating on scholarly and academic studies for a number of years. After a long hiatus he returned to painting in 2005 and since 2010 has been active as a printmaker. West Lake in Hangzhou, one of the most famous and beautiful landscapes in China and a source of inspiration to countless painters and poets for well over a thousand years, provides the thematic content of both his paintings and prints. West Lake has become an increasingly disembodied presence in Yan’s paintings over the last decade, culminating in the works of 2016. Rejecting the traditional media of oil on canvas or ink on paper, Yan evolved a hybrid technique in which the image emerges from multiple layers of sanding the layers of plaster powder on which he paints, allowing only glimpses of landscape motifs to emerge. His hommages to West Lake and all it stands for belong to a long tradition but it is the unfailing interest of the painterly surface, full of surprises and unanticipated effects including scratching, scraping and erasing, that holds the attention of the viewer.

Yuan Song has a particular interest in things that are in order. Being borderline obsessive-compulsive, he is easily stressed because the things around us are often in disorder and chaos. About a year ago, Yuan made the conscious effort to explore the non-orderly part of the world by collecting cheap materials, many of them either transparent or reflective. He pieces these materials together to form a foreign, microcosmic, luxurious world. The works are seductive on the outside, like a fragmented, highly concentrated view of the consumer world. In a network of colorful rays of light, diamond-like objects shine brilliantly in front of mirrors. Looking at these works is like entering a fantasy of desires. Everything looks beautiful, but in fact, we are not seeing anything real, only a transparent void and mirror images of a maze. What we see in those twisted mirrors are the passionate but confused faces of ourselves.