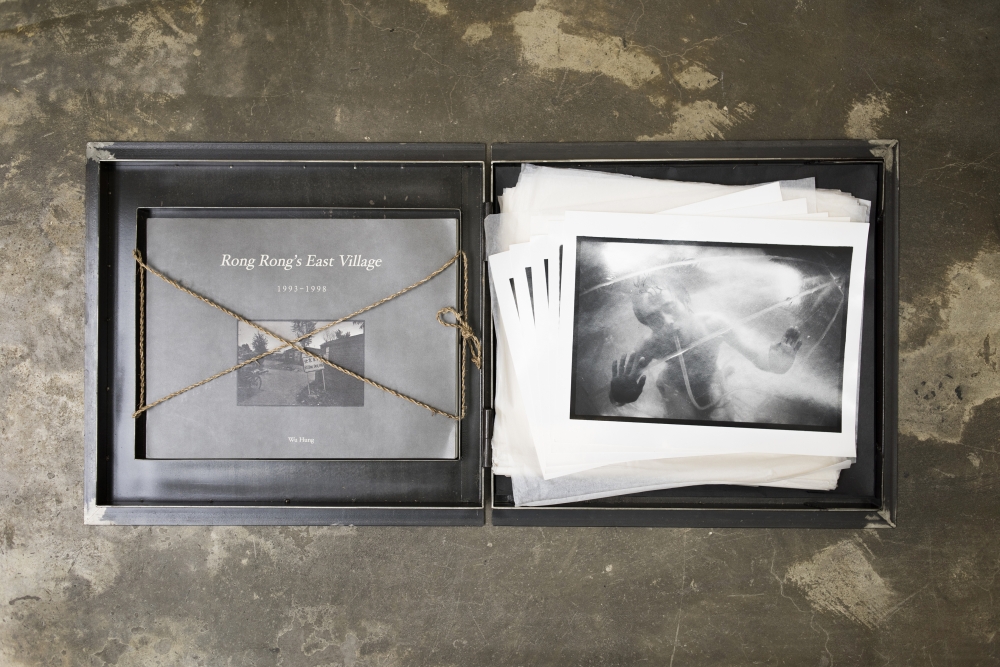 In this striking publication the artistic endeavors of a group of young artists in Beijing’s East Village are captured in the photographs of Rong Rong, one of the most talented artists to have emerged in China in the last decade.  Rong Rong moved from Fujian to Beijing in 1993, armed only with his camera and his aspirations. Shortly after settling in a run-down district of Beijing, he discovered that his neighbors included many young artistic rebels who like himself had moved from the provinces to Beijing. They soon realized that conventional media was no longer adequate to convey their sense of liberation from the social restraints of their adolescence. Rong Rong was a vital witness during this brief period when a group of painters, poets and musicians participated in performances that have come to symbolize this dramatic moment when all barriers against freedom of expression were demolished.

The forty photographs contained in the limited edition portfolio designed by the artist are divided into three groups according to their subjects and dates of execution. The first group, taken from 1993 to June 1994, portrays the East Village’s artistic community in its original location. The second group records continuing performances by East Village artists from late 1994 to 1997, after the community had been forced to disperse. The third group consists of Rong Rong’s self-portraits taken in his East Village days.

Rong Rong’s photographs convey the drama and mystery of these surreptitious performances. Zhang Huan’s feats of endurance in Twelve Square Meters and Forty Five Kilos contrast with the deadpan humor and ambiguous sexuality of Ma Liuming’s Fen/Ma Liuming’s Lunch. His portraits of the denizens of this shabby artistic community convey their self-awareness and intensity while his views of the village itself are memorable images of urban desolation. In the ten years since Rong Rong took these photographs, the ethos that briefly united this fascinating group of personalities has disappeared with the dispersal of the artists and the destruction of their environment.

Accompanying this selection of photographs are extracts from the diary Rong Rong kept while he was living in the East Village with extensive commentary by Wu Hung, a Harry A. Vanderstappen Distinguished Service Professor in Chinese Art History at the University of Chicago.  The journal is a detailed account of this formative period in the development of a true Chinese avant-garde. In letters to his sister, it vividly conveys his excitement at discovering his true vocation as a photographer and his wish to memorialize the personalities and events of this brief period that he knew intuitively would be significant in the development of Chinese art. It is copiously illustrated with photographs that are being published for the first time.

The deluxe edition is published in an edition of thirty-eight (copies 39 and 40 are artist’s proofs). An iron box, designed by the artist, contains forty gelatin silver prints, each signed and numbered by the artist.