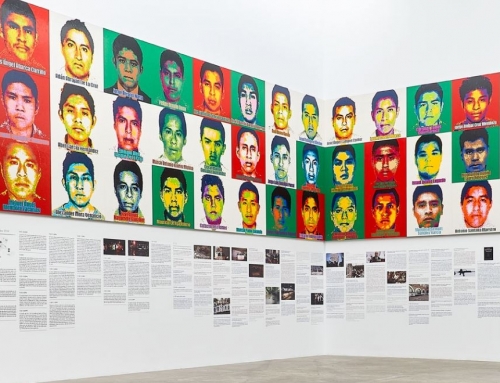 Despite the geographical distance between China and Mexico, Ai Weiwei explores the traumas experienced in these two places in a narrative that appeals to our obligation to construct social memory. This project brings together the concern represented by the destruction of cultural heritage and our relationship with our ancestors; the trauma signified by the attack on the future, which presumes violence against young people.

Ai Weiwei presents his greatest historical and political readymade at the MUAC: the Wang Family Ancestral Hall (2015), a Ming-dynasty-era wooden temple that registers the destruction of Chinese cultural heritage in the violence of revolution, the loss of traditional rural society, and the commodification of antiquities. These four-hundred-year-old ruins epitomize the complex negotiations between new and old, and this artwork marks the period of constant surveillance that the artist endured in Beijing after his 2011 arrest, before he went into exile in Europe.

In 2016, Ai Weiwei visited Mexico and this provided the motivation for a new project about the trauma associated with losing the future. Through a documentary film and a series of portraits made with Lego pieces, the artist explores the personal and social consequences of the disappearance of the 43 students from the Escuela Normal Rural de Ayotzinapa on the night of September 26-27, 2014. This project makes a bid for constructing memory as an invisible tie that binds us to our ancestors and maps out an obligation to the generations that succeed us.